I went to Brighton last week for a conference with work where I ran a workshop on how to be creative; the workshop was quite playful compared to the rest of the (rather more serious and business-y) agenda, and covered key questions like ‘how do you put a giraffe in a fridge?’ It was good fun to run and big thanks to all the people who came along. People seemed to really get into it, and I gave everyone a contract to sign at the end to say which practical tip they were going to take away with them. Might seem like a bit of a gimmick, but not one contract was left on the table afterwards, so everyone took them away. I take this as a good sign and hope we (I was ably assisted by a colleague, Mark) managed to spread a little bit of creativity around some workplaces.

While I was there I had a couple of hours to walk round Brighton. I’ve never been to Brighton before, so not one to miss the opportunity – despite already having several bags to drag across the country with me – I took my camera and thought I’d have a nosey round (I also took my lomo but haven’t had the film developed yet). It was fairly overcast, but at least that meant the sky didn’t blow out – I tend to find this a problem even with a permanently attached UV filter. I must be going wrong somewhere.

I tried to be a bit more selective in setting up my shots than usual, as I’m conscious that I often end up with too many pictures where the subject isn’t clear. I tried framing a point of interest in the foreground with a wide aperture, to blur the background, which worked okay. 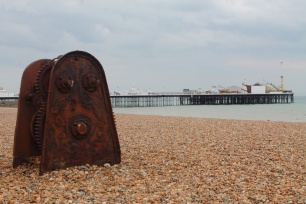 I thought I’d try a couple in black & white while I was editing them, or in the case of the lamp post, just tweaking the contrast, as it looks b&w anyway. I should experiment more with b&w shots. I’ve only recently learnt that if you shoot in b&w in raw, you can always convert to colour in post-processing, so there’s no excuse not to really, you can always change your mind later.

I’ve learnt to take more pictures of odd things which I might not necessarily think would make a great picture on first glance. I quite liked this sign, and decided to snap it. I like the resulting juxtaposition of the poster (and its message) with the couple walking past in the background as I took the shot. If I’m honest, this was accidental, but I’ll take it! The composition could be better – the couple could be in focus, and the post in the background is distracting – but if you ignore that, there’s something about it. Just shows an ‘interesting’ picture could appear at any moment.

I think the ones below are probably my favourites.