While I did very little all week in Koh Samui, on the one day I felt really adventurous, I decided to have a go on a moped.

Let me set the context. In Thailand, in fact in most of South East Asia, everyone rides mopeds. And not only do they ride mopeds, they carry shopping on them, and whatever else they might need to transport, which can be anything from a dozen crates of chickens to furniture.  If you’re not riding a moped…well. You’re probably a bit safer. Thailand is apparently the most dangerous country in the world to ride a moped.

While I have no particular ambition to carry shopping and animals on a scooter, getting around on moped is what most people do in Thailand, locals and tourists alike. It’s cheaper and more convenient than relying on taxis, easy to explore the local area, and since I’ll be in Thailand for a few weeks, I thought I should probably learn to ride one.

Since I was staying in a really quiet area with peaceful roads and hardly any traffic, I thought this would be the safest place while I’m travelling to learn how to ride a moped. Ha! I forgot I was using my own uncoordinated body. I do technically have a licence for riding a small moped, even though I’ve never ridden one before – apparently if you passed your driving test pre-2001 in the UK, you can ride up to 50cc mopeds without taking the test. Must be easy then, right?

Dave, the Airbnb host, showed me how to control it. Apparently most people forget to stop accelerating and brake at the same time, and this is a key reason learners come off. Okay, I said, confident. I’ve got this.

I strapped on my helmet, got on, lunged forward a bit, braked a bit, accelerated a bit, thought ‘I’ve sooo got this’, set off onto the road and managed to get about 30 yards before someone overtook my rapid 5mph speed and I panicked and fell off. Doh.

Fortunately I fell onto the grass, although I did sustain some scrapes and minor cuts and bruises – and had neck-ache the next day, who knew you could get whiplash at 5mph?? But without a doubt the most damage was to my ego. How embarrassing!!

Dave came over to check I was okay and to drive the bike back, which took him about three seconds because I was still within spitting distance of where I’d set off from, and the woman who’d freaked me out by overtaking me – not her fault at all – was very reassuring that it happens to everyone, don’t worry about it, etc. etc. Yeah, but where are all those learner muppets falling off bikes now eh?? Only me coming off it here lah!

Well, that was certainly enough excitement for one day, so I went down to the beach instead, where I couldn’t hurt myself or anyone else. The next day I borrowed a push bike, which was considerably safer, although I haven’t ridden one for years so I was still a bit wobbly. I didn’t fall off it though, so, you know, could have been worse.

I rode down to a nearby wat (temple), which actually wasn’t much further than I’d managed to walk down the beach the day before. But I went a different way so it definitely counts as exploring.

Here’s a crap picture of the bike (to prove I rode it) and wat in the background. I had to stay at a distance as I couldn’t get into the temple, having stupidly forgot to bring anything to cover my knees. There’s also a slightly better picture of the boat temple which was close by. 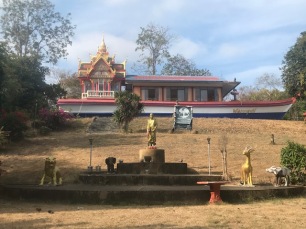 And so ended my adventures with mopeds. At least until the scabs have healed anyway.