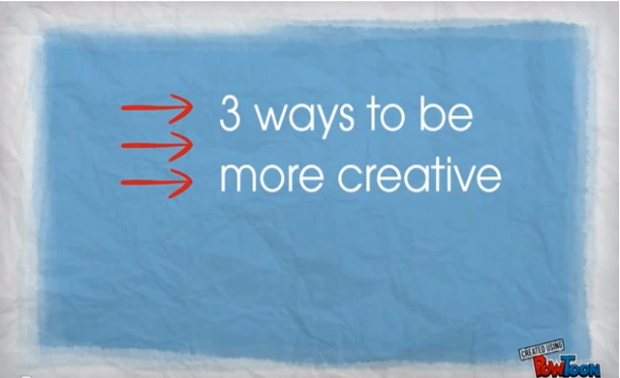 I had a play around with PowToon a few days ago to see how easy (or not) it was to create animated PowerPoint-type presentation videos. As I’ll be running a workshop at the BIG Conference in Brighton next week about being more creative, I thought I’d use some of the initial workshop content in it, hence the video being about ways people can be more creative. Only three ways mind you, it was designed to be a short video.

Here it is on YouTube. I actually started a PowToon video on behavioural economics based on the course I’ve just done, but because I decided I needed to think for a while about the content, it didn’t work as a quick experiment, so I switched to the creativity one. Maybe I’ll get back to the BE video another day.

I reckon it took me about three hours in total, having never used it before, and I don’t think the results are too bad. I’ve over-used some of the effects (e.g. text appearing in the same way throughout) but it was pretty intuitive to use, and very similar to PPT, just with timings for all the animations.

There are some limitations to having a free account, mainly the relatively small number of icons available (you’d soon tire of using the same ones over and over) but you can upload your own images, like I did with some of my photos – or you could use icons created in Illustrator etc. and upload those. I actually forgot to look at changing the background music, but I think there are more options with the premium accounts.

You also only get 30 ‘exports’ of whatever videos you create with a free account, which are exports to YouTube but don’t allow you to download the file. Presumably once you hit 30, you have to buy a paid-for account. And obviously the PowToon branding is all over it, which it isn’t with the paid accounts.

PowToon is still in beta but given how straightforward it was to use, I think we’ll see this kind of animation software quickly becoming more and more commonplace as a communication tool, both generally online (we are visual creatures after all) but also in the business world. In my day job as a researcher, we’ll see people increasingly using this kind of software as substitutes or companions to market research outputs; short, snappy and engaging ways of getting across key messages to busy stakeholders. If you can use PowerPoint, as 95% of people in the ‘presenting’ business pretty much do, then you can use something like this, so why wouldn’t you if you want to make an impact? (Unfortunately, many people who think they can use PPT, and I don’t just mean researchers, do a pretty awful job, so maybe there’ll be some pretty awful animations to look forward to over the coming months. Although more than likely these people won’t bother as animations will be too much of an effort and they’ll stick with the bullet-point and bar chart PPT default.)

I’m planning to suss out a few similar programmes over the next few weeks (this is only the first one, so I can’t say it’s the best, but it was certainly easy to use), so if you have any tips on what to look at next, suggestions would be very welcome.